So the latest AtV broadcast is online. This one had a high degree of anticipation because it is supposed to showcase the “procedural moons” coming in the 3.0 build. To be honest, as a 3D developer, though none of it is new to me, from a technical standpoint, I thought this was a good and informative episode for backers.

As I’ve said before, as these things go, clearly these guys are doing their best to make a game like this with a custom engine that simply isn’t able to do it. It doesn’t matter what they do with their custom engine, they are never – ever – going to be able to pull off the game they want to build, and at the scale they are shooting for. Like at all. Their biggest problem, as I said back in 2015, is the underlying CryEngine core, which was never designed for this. And even with Amazon’s LumberYard (which they switched to late last year) having done some nifty things to CryEngine, in addition to fixing bugs etc, they’ve still got an uphill battle.

Last year when they started touting “procedural planets”, most backers were of the impression that this refers to how the world is generated rather than how the terrain (planets and moons) is generated using various tools, including middleware such as World Machine (what they are said to be using). There is a huge difference between “procedural worlds” and “procedural terrain”; even if you consider space itself to be terrain. When you build the world in an editor, instead of using data scripts, they’re “hand crafted”. When it comes to world creation, there is a difference between No Man’s Sky and Elite Dangerous; or Infinity Battlescape and Call Of Duty Infinite War.

You can have the best of both technologies, but that would depend on your tools and expertise. For example, in my legacy Battlecruiser / Universal Combat games, I used both world and terrain procedural generation technologies which, believe it or not, were built as far back as the nineties when most of this was considered alchemy. Over the years, as hardware and software improved, a lot of that work was improved upon, across various derivative versions of those games, while retaining the underlying architecture. You can download Universal Combat CE on Steam, and also the modding tools which explain the underlying tech, and check it out for yourself. This Vimeo movie which I made back in Dec 2015, shows how the space and planetary worlds are handled in Universal Combat CE which has a massive galaxy containing standard and gas giant planets, as well as moons. And you can enter all of them; some you can exit in fps mode without dying. You can land on a planet, exit your craft in fps, go to an external camera view, and zoom all the way out to show the sense of scale.

In the June 22nd AtV broadcast, they showed (@ 26:46) the new tool they are using for world entity placement. I wrote about that back on June 24th. Excerpt:

“As if all that wasn’t bad enough, having dropped the pretext of doing procedural planets in the game world, in a June 22nd broadcast of Around The Verse, they showed a segment (FF to 26:46) showcasing a new tool – outside of the CryEditor – that’s basically barebones for manual entity placement. In a “level” based world. Essentially, this tool basically sets up the world entities – and has nothing to do with the actual creation of the 110 star systems and 500+ planets and moons they have yet to manually create (in the CryEditor) for the game. And as of the upcoming 3.0, they are still struggling to create even the three moons promised; even after removing the promised planet from the schedule. Six years later, they are still building tools. For a game that was supposed to have been released in Nov 2014.”

The problem is going to be compounded by the fact that, from what I can see and tell from their engine design, it is going to be a major task to have entire planets and/or moons in the game world, and which players can enter/exit as seen in games like Infinity Battlespace, Dual Universe, Universal Combat etc. Performance and memory requirements aside, that level of fidelity is near impossible with their engine. Which explains why they have since switched from that sort of talk, to now doing smaller moons and planetoids – similar to how Elite Dangerous does them. What’s left to be seen is how they end up adding them to the game world. After adding the moon|planetoid entity to the scene/level, there are only two ways of doing it:

To visualize the above in Star Citizen : start the game, leave your quarters, grab a ship, take off from the station, target a moon, fly to it, then seamlessly transition into it, or waiting for a loading screen after you hit the trigger point around the object which signals a transition.

While this AtV isn’t showing mostly what is coming in 3.0, it appears to be a combination of rudimentary things coming in 3.0, combined with on-going R&D for what they think they’re going to be able to pull off in the long term. I mention this because there is a frame where they were showing a cross-section cutout of a planet, in which the cutout shows an area with vegetation, despite the fact that the upcoming moons and planetoids are barren landscapes.

And as they’ve done so many times in the past (as recently as CitizenCon 2016 in which they showed what was purportedly coming in 3.0, due out before Dec 19th, 2016), instead of, you know, showing actual game play for a patch that’s supposedly less than a month away, they’re still making editor-based movie bullshots (see the Reclaimer @ 26:37 in the AtV video) which have zero correlation to the actual game client they’re releasing. Except this one is Pupil To Planet (Dec 2015) redux for 2017.

BONUS: If you really want to have a good laugh, take a look at this YouTube doubler video showing the same planet to space zooming between Star Citizen and Elite Dangerous. Yeah.

PERFORMANCE – THE BANE OF 3D WORLDS Though parts of this presentation was running in the game editor, and low frame rates are usually expected – especially for an Alpha – depending on what is being rendered, the performance issues which are already existent in every build of Star Citizen, (including the current 2.6.3 build released back in April)  client and server, are only going to get a whole lot worse as they try to increase the size of the world, add more stuff to it etc.

You did notice parts of the broadcast where 4 airborne clients in the scene, with the frame rate at around a constant 15 fps; while other parts showed 20 fps on the ground?

You did? Right. That’s absolutely horrific.

Especially when you consider that the scenes are already barren, and mostly built off repetitive (you can see the patterns if you look closely e.g. in the rock formations) procedural entities. In the existing 2.6.3 build, you can hardly get 8 clients in an instance, without either the server falling over, or the client dying. Now imagine having those 8 clients in 3.0, on a moon, all of them flying around, or hovering (they don’t touch the terrain) across the terrain in a Dragonfly or Nox. And firing weapons. Or running around in fps mode. All of that with physics and collisions active. Then just wait until they add pathfinding and AI, and all that to the mix; not to mention gameplay elements such as mining.

And before you utter their buzzwords and terms such as “network bind culling” or “serialized variables”, don’t. It has nothing to do with that. And even if and when they somehow magically got those two networking features implemented, it’s not going to be a huge performance gain either way. Which is probably one of the reasons why neither is in the schedule, or continues to be delayed.

Back in late June, a source had told me that they were having some serious performance issues with this build, and that they had no idea how they are even going to release it within the current schedule given. I wrote about that back on June 24th. Excerpt:

“BREAKING two sources have now confirmed that 3.0 is such a technological nightmare, and performance hog, that nobody knows how they are going to end up releasing it within the current time frame; let alone for GamesCom.

I have no doubt that they will probably release something called 3.0, then continue to update it. They did the same thing with 2.0. Right up to 2.6.x” 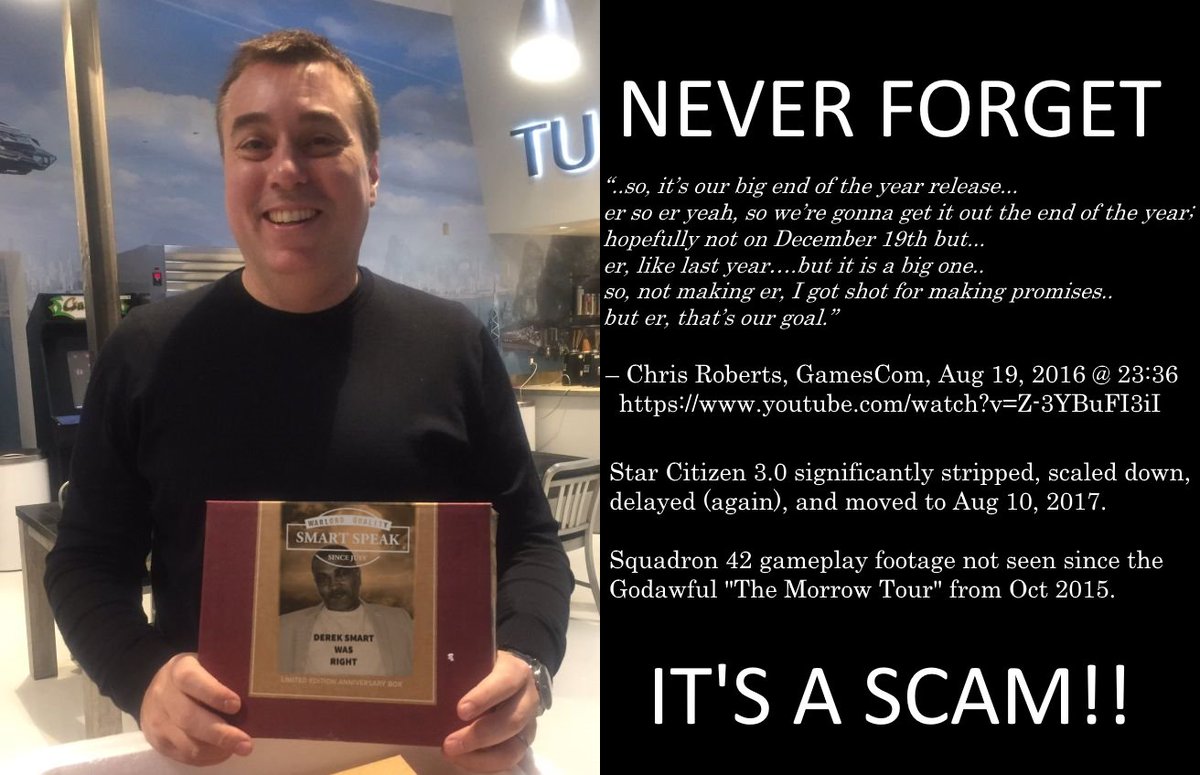 Today’s dev schedule update is going to be interesting if it’s like last week’s (which I wrote about here) in which the 3.0 release window was again pushed, but further and all the way to Aug 10th, with a huge list of items delayed or changed to TBD status.

The proximity of this AtV broadcast, to the upcoming 3.0 release date – both knocking up against the upcoming GamesCom (Aug 22-26), one of their biggest yearly funding drives – is also going to factor in whether or not 3.0 actually releases before, during, or after the show. And given the amount of work that seems to be going into this 3.0 build, it is safe to say that it’s going to be the only major release this year. This is similar to 2.0 in 2015, and 2.6 in 2016. So once this is released, it’s probably going to be 3.0x until they get to 3.1. If they even get that far, seeing as they are now rumored to be having financial issues.

And if 3.0 isn’t released within the stated period, or is released with most of the promises cut, with major performance issues etc, my guess is that they’re still going to be doing bullshots while peddling the promise and dreams of things yet to come – six years, and over $153 million later.