THE STAR CITIZEN PROJECT IS IN FINANCIAL TROUBLE

As I have reported in the past, for some time now sources have informed me that the project was in financial straits. Despite denials from some in the toxic backer community, and silence from CIG/RSI – even though they had pledged to provide financials to backers – their recent 2016 financials filing in the UK, had some curious entries which served to support this notion.

STAR CITIZEN 3.0 DELAYED – AGAIN. BUT THE SALE MUST GO ON!

The on-going saga surrounding the much touted 3.0 build also just had another event.

Back on May 26th, I wrote up an article based on some new info sent to me via various sources. Sources had claimed that not only was Squadron 42, the single player game based on Star Citizen, not due out in 2017, but neither is Star Citizen itself. They also claimed that the internal dev schedule was totally different from the public version, and that the former stretched all the way to 2021.

Since they started publicizing the dev schedule, it has been consistently riddled with bogus and highly questionable entries. During that time, they continued to use all kinds of new and inventive ways to squeeze their backer whales for money, under the guise of progress being made on the project. And they just did it – again.

After announcing a new concept sale for June 23rd (date of new schedule) weeks prior, they started the sale a day before the new schedule was due to be released. The sale was for a “racing” bike, which doesn’t exist, and for a game mechanic that doesn’t exist either; but which they have been touting as coming in 3.0. The same build in which they touted procedural planets, but have now settled for “level” based moons and planetoids due to on-going technical difficulties with the engine. I wrote about this on June 22nd:

“**BREAKING*** two sources have now confirmed that 3.0 is such a technological nightmare, and performance hog, that nobody knows how they are going to end up releasing it within the current time frame; let alone for GamesCom.

Croberts working on his new justification speech (aka newsletter), in which he may have no choice but to admit that the switch to LY hasn’t been as straightforward (gee, who knew!?) as they made it out to be – seven months ago.

It’s amazing to me that since July 2015, I’ve been right about so many things, that those guys don’t even bother recapping them anymore. This despite the fact that I document them religiously in my blogs and forum posts – for a reason.

All that aside, the primary claim that “they can’t build the game as pitched” and which everyone was saying that I was wrong about, remains true.

Ignoring the $150m (they were at $85, and have since passed this) + proper engine (they switched to the more advanced LY) that I said they would need to pull it off.

I have no doubt that they will probably release something called 3.0, then continue to update it. They did the same thing with 2.0. Right up to 2.6.x

ps: There is another JPEG sale tomorrow June 23rd. So they’re probably going to lie in tomorrow’s 3.0 schedule update, then update it again the following week with the proper data.”

The sale for the Nox bike went up, and so far they have raised about $700K from it. Bear in mind that the funding chart is said to be highly inaccurate and being manipulated and used by CIG/RSI as a way to show that there is continued interest in the project, 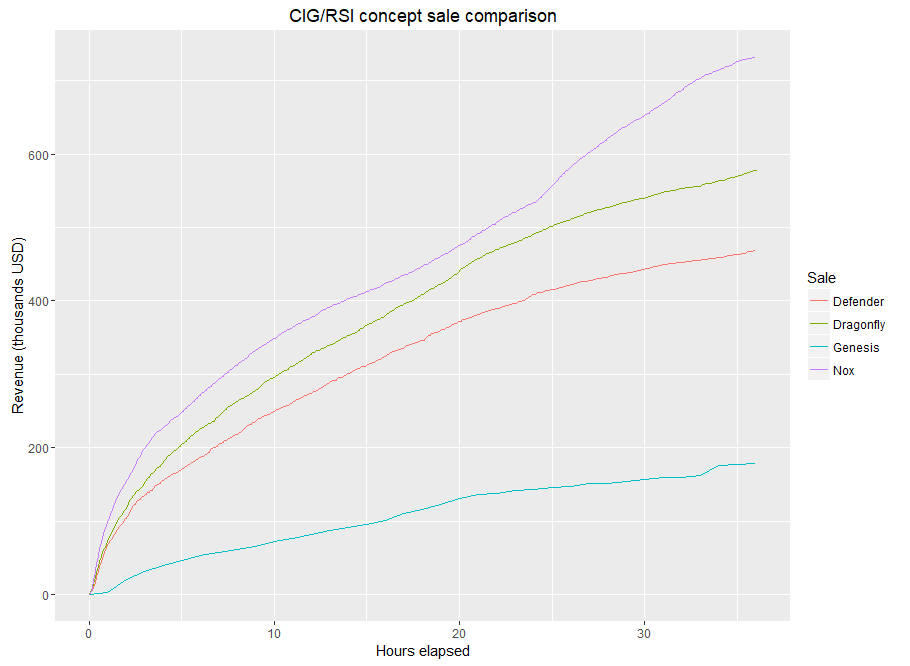 Then the 3.0 schedule went up the day following the sale. And it’s hilariously as expected.

On June 20th, I had written that, from looking at the June 16th schedule, that there was no way they were going to make it.

Basically, a total of 7 items were “completed” (this is subjective, when you look at notes which indicate that such tasks spawned new sub-tasks), and a total of 19 (!) were pushed back.

This is all in line with sources saying that the internal dev and public schedules are completely out of sync, and that CIG/RSI are just releasing as much as they feel is needed to appease backers. As far back as the April schedule, which I wrote about, among other things, and during which it was scheduled to be released the end of June, I was saying that it’s highly unlikely to happen.

The Star Citizen Tracker which is religiously maintained and updated as development continues, is a stark reminder that, regardless of the rumored 2021 date (subject to further delays of course), there is so much work left to be done, that even if they automagically got the resources (money, talent, tech) to pull it off, that it clearly has another five or more years to go.

And here I was, back in July 2015 being conservative when I stated that to pull off what they promised would require $150 million minimum, a competent team, and capable engine. Since that time, at $85 million raised, they’ve exceeded that $150m, and switched engines – even as they continue to bleed experienced talent who are being replaced by inexperienced people who have to get up to speed on a six year project.

With their two biggest fundraising events, GamesCom (Aug 22-26) and CitizenCon (Oct 27th) coming up, as they have done in the past, it is likely that they will brand and push out whatever build (3.0 was previously 2.7, as sources had stated that the former didn’t exist at the time Chris announced it) they have in time for either of those two events.

Which brings me to…

Basically, ahead of this latest sale, without any forewarning or announcement, they yanked the Redeemer ship from sale.

Unless you are familiar with how the game’s assets work, you won’t understand what just happened. Basically, this move not only removes the ability for backers to trade up and/or trade in better ships, but it also requires them to spend more money in order to get what they want. Here, are some choice comments (1, 2 3) from those affected.

“I’ve got a big ship pack and am fully reliant on CCUs to convert the contained ships into the ones I want.
After CIG’s initial threat to erase all $0 CCUs from our hangars, I quickly hunkered down to make a solid upgrade plan, got it in place, and bought all the necessary CCUs. These were not particularly cheap, and largely revolved around using the Redeemer as a stepping stone, simply because it iswas the only always-available ship at that price. Now a large majority of the upgrade plan that CIG ‘encouraged’ me to invest in just got decimated. And the remainder of it will go down the drain with the $0 CCU wipe, removing the CCUs I can now no longer use because of the Redeemer removal.
I’m starting to have some serious regret about giving money to a company that treats its backers with such blatant hostility.”

“Kinda pissed.
I bought the 5-pack of the Nox with the sole intention of grabbing 3x Redeemers so I could use my Eclipse and BMM CCU with LTI, and still have a Redeemer and a Nox to hang on to.
Without warning that kinda screws up my plans to finalize ships before the 3.0 $0CCU wipe…
Awesome. :/”

“My guess is that the Redeemer was removed to break the $0 CCU conversion to Banu Merchantman.
Might be a very clever first step to the anticipated Great $0 CCU Hangar Cleanout of ’17.
Once they started doing sudden, unannounced price changes on existing ships (like BMM going from $250>$300>$350), the writing was on the wall.
My guess is they WILL continue to announce prices for new Concept ships ahead of time (as stated), but they WON’T announce price hikes for anything that isn’t new. And temporarily removing the Redeemer removes a critical permanent CCU upgrade point.
So…. Remove previously permanent ships temporarily, mix in some selective price hikes, and remove old $0 CCUs from hangars- it will go along way to stop the ability to build ships for less than sticker price.
If you can, complete any upgrade chains while it is still possible!”

As if all that wasn’t bad enough, having dropped the pretext of doing procedural planets in the game world, in a June 22nd broadcast of Around The Verse, they showed a segment (FF to 26:46) showcasing a new tool – outside of the CryEditor – that’s basically barebones for manual entity placement. In a “level” based world. Essentially, this tool basically sets up the world entities – and has nothing to do with the actual creation of the 110 star systems and 500+ planets and moons they have yet to manually create (in the CryEditor) for the game. And as of the upcoming 3.0, they are still struggling to create even the three moons promised; even after removing the promised planet from the schedule.

Six years later, they are still building tools. For a game that was supposed to have been released in Nov 2014.