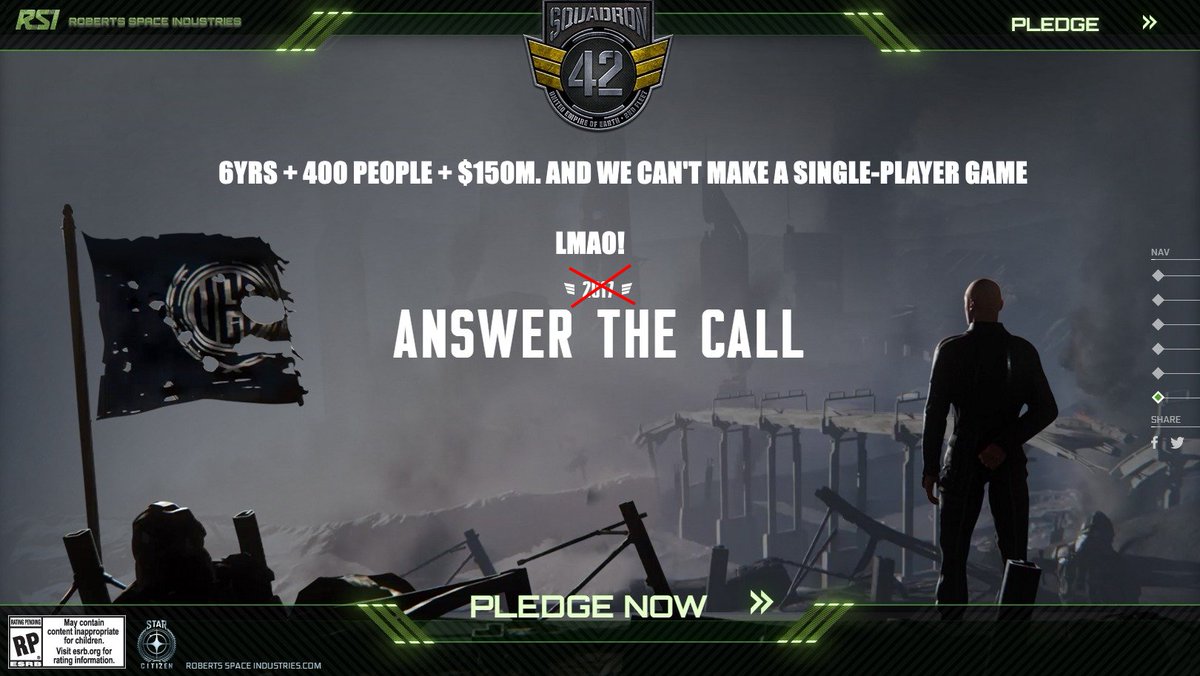 As I reported on Twitter earlier today, several sources, as they have done twice before in 2015 and 2016, have once again informed me that SQ42 is now a 2018 game. In fact, the current internal schedule shows it stretching all the way to mid-2018, and possibly beyond. The past two times that I had reported this, some people didn’t believe it. And CIG kept denying it. This Sept 2016 denial was my favorite. Both 2015 and 2016 came and went. Right up to the blatant lies that CIG told during the events (GamesCom and CitizenCon) of Q4/2016. I wrote extensively about that in my Shattered Dreams blog from Oct 2016.

Sources also tell me that they’re frantically trying to either get a preview or trailer out before the end of the year. So yeah, probably a repeat of Q4/2016 all over again.

Oh, and they have definitely chopped up the SQ42 game. I reported on this back in 2016 as well, but they have apparently stuck to the goal of releasing the once full game, into bits and pieces in order to “keep things going and raising money”. It makes perfect sense if you ask me. They know that the minute they release any “final” version of any portion of this train-wreck project, that’s it’s all over. So why not maintain the bait and switch Status Quo by splitting a full game into parts, then sell them separately? If you recall, they did that back in 2016 when they split SQ42 from Star Citizen, in order to sell it separately. Except this time, they’re going to split SQ42 even further. Which, now that I think about it, explains why you can buy that game for $15 (instead of $45) if you buy it as a bundle ($45 + $15) with Star Citizen. My God man! We’re doing it all wrong.

I have seen it.

The internal dev schedule looks absolutely nothing like the public dev schedule they put up for backers. Not only does the internal one have entries for SQ42, but it also shows all the tech and asset dependencies that the title is currently awaiting. Since SQ42 uses the same engine as Star Citizen Actual, it stands to reason that, networking fiasco aside, they simply can’t complete that title without those core engine components and assets.

When they first released a dev schedule, following backer dissent and outcry, it was along the lines of what was shown in Q4/2016. They got quite a bit of money by the time dust settled, and backer trust (in some regard) was regained. That didn’t last very long because shortly thereafter, they released a new version for the upcoming 3.0 that looked nothing like the original plan, though it did go all the way to 4.0. Then, shockingly, they later released another version which completely removed everything after 3.2. Yeah.

Basically, having failed to “save PC gaming“, while singing the “death to publishers!” theme song, Chris is basically doing what publishers know some devs with publisher funding tend to do: maintain two separate schedules. One to keep the publisher happy, and milestones paid; and one that’s the actual internal one which they hope will match the timeline that leads to a game. It’s the equivalent of having two accounting “books”, one of which is highly fraudulent. Only this time, backers are the publishers. Except that the backers still giving them money, are either completely gullible fools, or they’re using Star Citizen to launder money as I wrote in my Money Laundromat blog.

It is amazing to me that there are two games in development; but yet still, even though backers haven’t seen anything tangible from SQ42 since the Godawful Morrow Tour from 2015, that it doesn’t even appear in the public dev schedule. It’s as if it doesn’t even exist; or that they know if they release it, that backers would freak out, and see that it’s nowhere near complete in the short-term. This despite the fact that they keep showing art and videos purportedly from the game. But that’s normal though, right?

What’s even more egregious to me, is that backers have forked out over $150 million for two games, but they have to rely on insider leaks – for a crowdfunded project – to get most of the tangible and reliable information about the project they paid for. And they still don’t have a clue about most of what’s left to do in the games. So we have a public tracker that’s just as hilarious as it is shocking.

The project is FUBAR. And backers are in for the most interesting shocker yet. But I’m holding on to that one for now. Stay tuned.