So I wrote The Road To 3.0 article that the recent 48-60 client test was just a ruse and propaganda which just happens to start 2 weeks before the anniversary sales. Like always. I also later expanded on that with an update in my forums. And in case you missed it, I also previously gave a lot of technical reasons why Star Citizen will never – ever – be an MMO.

Since most of the guys in Evocati are hand-picked whales who are helping RSI/CIG to perpetrate a full blown scam, of which this recent nonsense is just part of that, those guys are the ones leaking bullshit information in a pitiful attempt to mislead their fellow backers. This despite the fact that RSI/CIG know that they simply can’t keep a lid on stuff like this. Not to mention the fact that, as has always happened in the past, by the time they eventually release whatever they will be calling 3.0, it would immediately obvious that they were effectively doing what they’ve always done in the past: deceptive practices.

So, straight from the discussion channel, below are the metrics and results posted. I wrote that this was just a sham, and that it served no purpose other than to start propaganda ahead of the upcoming sale, as well as perhaps their testing of new (possibly .x.large) AWS tiers which they think (it’s not) is going to provide better experience and performance. The main issue here is that they know the server can’t handle more than 10 clients in any reasonable (think combat, traversal etc) form, and that the server is still completely unstable (now more than ever before). So, ask yourself why they’re doing these sort of client tests now, when they should be fixing bugs, getting the build complete, getting the game to run at least 16 clients – solid – before reaching for the insurmountable. It makes no sense. But it does make sense when you consider all the similar bullshit they’ve pulled these past years.

So, lets get started. Below are the metrics from the 3.0q patch which was used for the test.

This was 48 player maxed out server. The physical (not Hyperthreading) core counts range from 4 to 20 cores. Result (FRAPS shots): Remember, RSI/CIG keeps all this under wraps, is actively using DMCA takedowns on YT, Vimeo etc, to suppress this Evocati test information from getting out. For a game that’s supposedly “open development” and which backers have reportedly given $164 million to develop. As funding continues to decline (currently down -40%) drastically year on year, it’s clear to see that they are coming up with new tricks. But ignore us though, keep giving them money and wait for what (trust me, it’s revealing – more soon) comes next.

“About those tests. Maybe you shouldn’t ask yourself about player numbers but about the performance at those player numbers… After all a player limit is just an integer value on the server. You can crank them up and claim success at 60 players anytime you want. Also remember gamescom? Remember a certain 20 minute restart procedure? Everyone in etf knows why those restarts were a thing now. Because 3.0 servers go down in agony performance wise after a quarter hour. If you go back and read about the test procedure for those 60 player tests you may find something very, very similar…” – Evocati Tester

In case you blinked and missed it, this past Friday 11/10/17, they unveiled yet another change to the dev schedule format. Compare to the 11/03/17 snapshot.

Finally, as you may have heard during the final presentation at CitizenCon, we are going to switch over to a quarterly release schedule for the PU in order to provide content drops on a more consistent basis. To that end, we will be modifying the Beyond 3.0 Overview section to a new PU Roadmap that will show you exactly where the various features and additions will fall in our quarterly release schedule. If a feature requires more work, then it will transition into the next release. This roadmap will be posted once 3.0.0 goes Live.

I am calling it right now, 3.0 is the MVP. They haven’t released a patch since 2.6.3 in April 2017. Now, they’re going to a quarterly release? Which means all the bugs and issues are going to be unfixed for a WHOLE QUARTER. Don’t forget that there are over 3000+ bugs still lurking in 2.6.3 and which have somehow been ignored and forgotten. Hey, remember back when they were going to do monthly updates? Yeah, me too. Aha! But do  you remember when the schedule totally looked like this? 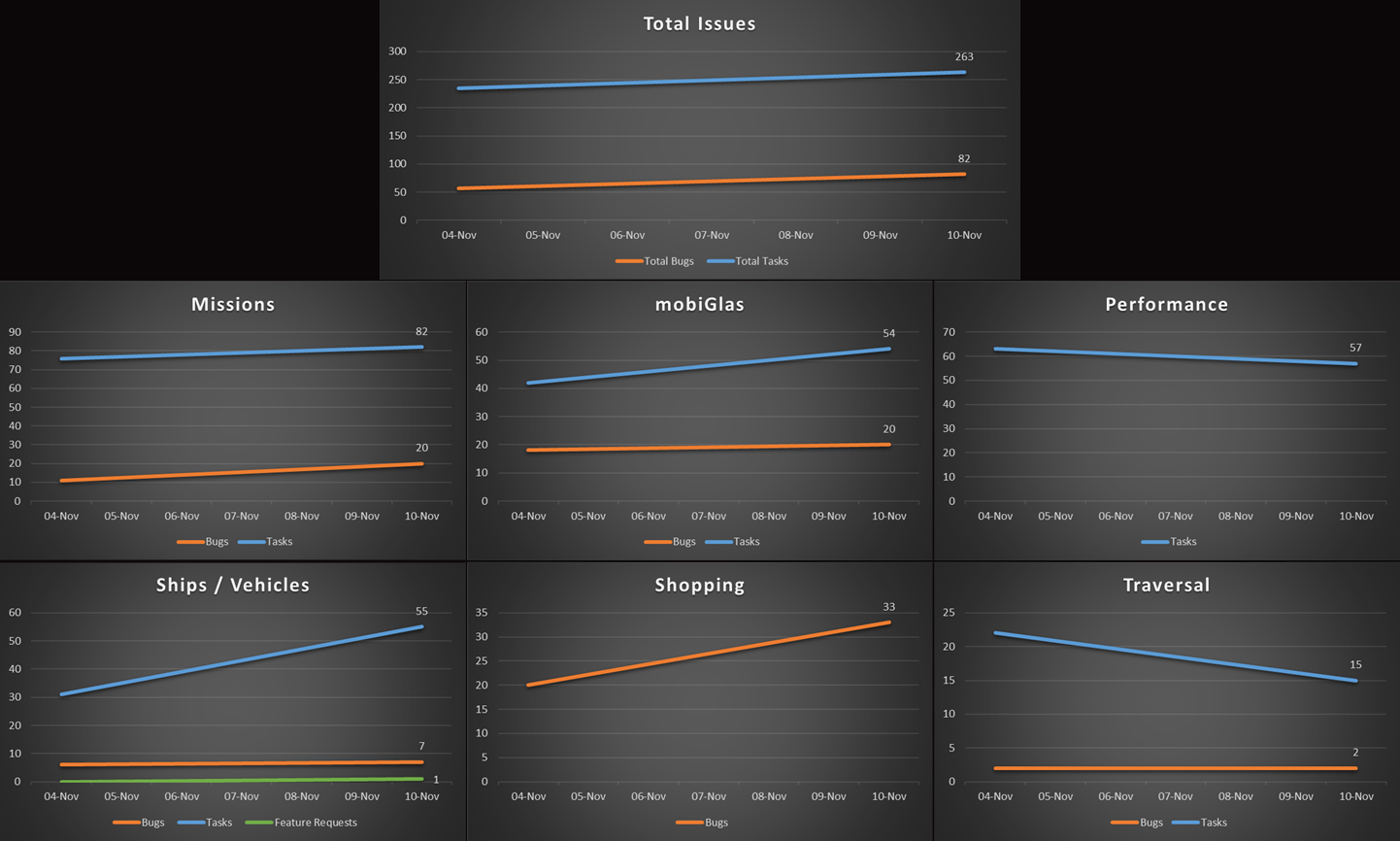 In addition to the total of 16 corporations involved in this venture, a few days ago on 11/08/17, they created another one. This time a foreign (incorporated in Delaware, though located in CA) entity called “Cloud Imperium LLC”. It’s not even complete yet, but you can go to https://businesssearch.sos.ca.gov/ and search for “Imperium” to pull it up. So that’s 17 in total now that we know of.