Seeing as five years and over $138 million later they have yet to ship either of the promised games, all eyes are on the Star Citizen project financials. Especially given the recent fundraising shenanigans (1, 2) that CIG has been up to of late. The US corporations are private entities, so they are not required to file financials. Those financials are only shared with investors, banks and similar parties. Backers of the project were once promised access to those financials if CIG failed to deliver the project within the allotted time. So far, aside from the fact that CIG have since rescinded that offer in the June 2016 ToS change, no backer has challenged them to produce the financials. I have written before that the state of their financials represents the smoking gun as it pertains to their ability to complete and deliver the project as promised.

In the UK, where there are three (!) corporate entities, they are required to file public financials for the preceding year, by Sept 30th. Back on Sept 26th, F42 (UK), the entity with the liabilities, and which is tasked with making the game (as the developer), filed their accounting. It was pretty uneventful. The other two corporate entities, CIG (UK) which now owns 100% (1, 2) of both F42 (UK) and RSI (UK), as well as F42 (GER) didn’t file. Yesterday, RSI (UK) filed their accounting; leaving only the parent company, CIG (UK) which is currently late in filing.

I had written back in my July 2016 blog about what appears to be the execs cashing out and selling back their shares to the parent company, thus taking out wealth from the company.

“There are so many holes in this whole thing that the minute I even make public everything I know, I would no doubt have pretty much impeded on-going investigations. So we wait. But while we’re waiting, here’s a nugget. Please ask them if it’s true that: after they founded a studio (Foundry42-UK) to help develop this game, and Chris pulled in his brother and childhood friends in from another company to head it, that less than two years later, another subsidiary (associated with the project) then turned around and bought the company back from those very people. Thus taking out a significant amount of wealth out of the project and putting it into the pockets of those very friends and family. While still paying his brother Erin, what amounts to almost $250K in yearly salary; not including benefits or bonuses – which aren’t disclosed. Aside from this being reported to be almost 3x what he was making at his previous company, it’s also 2x the average for a director in the Manchester region. And in case you forgot, this is a crowd-funded project.”

In 2015, according to the funding chart (which is 100% inaccurate), the project raised approximately $35.9 million. That’s not taking into account refunds, investor amounts, bank loans etc. The RSI (UK) filing clearly shows that they are playing a financial shell game with the funding that’s going into the project. Arguably one would do this sort of thing not only for tax and liability reasons, but also as way to mask accounting anomalies and irregularities, while also inflating the value of the associated entities.

Someone made a handy chart showing how the money reported in this filing, has moved around. When the parent entity, CIG (UK), files its accounting, we should have a much clearer picture of how the money – up to 2015 – flowed to the UK entities. It won’t tell us anything about the F42 GER financials, nor the financials for the two US studios. And when you think about it, the fact that backers have no insight into the financials – something they were promised – it’s going to be very interesting to see how those very people who are saying “it doesn’t matter“, react when the dust settles.

I am still of the belief that the project is on the verge of collapse; and the recent desperate cash grab plays into that. What is unclear is what form that collapse will take, how they will handle the wind down (e.g. from 4 studios and 350+ people), and whether or not the project will continue in some fashion following the downsizing. As of Nov 2016, they had 363 employees working at the four studios. That does not include the many contractors at third-party studios which are also working on the project. Though several (including no less than three high profile positions) have left since the chart below was shown by Chris Roberts; and many more are rumored to be on the way out.

Seeing as F42 (UK) and F42 (GER) are primarily tasked with tech and Squadron 42 (the single-player game) development, it stands to reason that the two US studios are likely to suffer the most casualties; especially since nobody with half a brain really thinks Star Citizen is ever going to see the light of day. 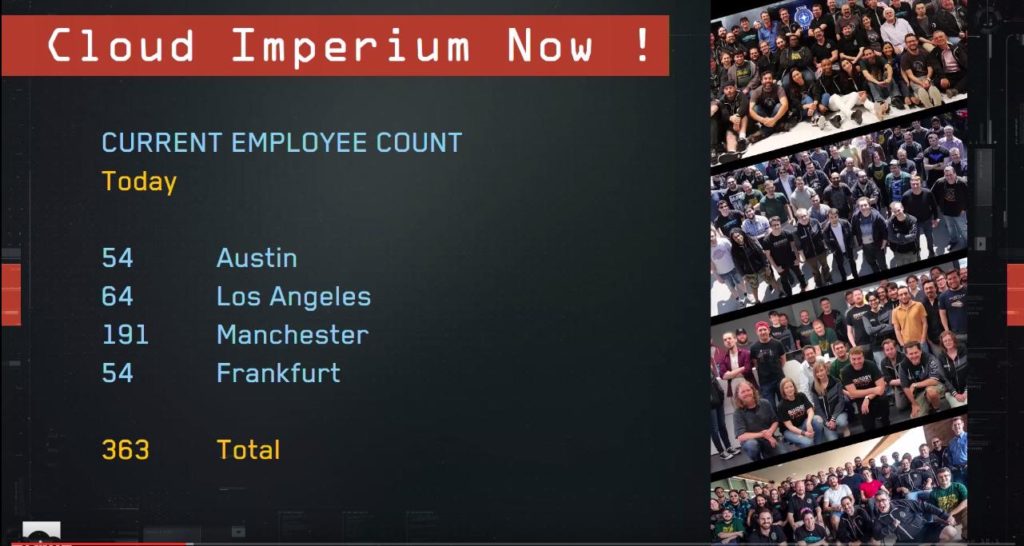 THE END OF YEAR FIVE

Back when I said that neither Star Citizen nor Squadron 42 was going to be released in 2016; I faced quite a bit of derision and attacks. You know, all the standard things I’ve been dealing with since I got involved in this farce last Summer. Then came the August GamesCom event (I wrote about that here) in which even more lofty promises were made; topped only by even more lofty promises in the Nov CitizenCon event, and the subsequent anniversary event. The key takeaway from all those three Q4/16 events is that CIG created proof-of-concept tech demos, passed them off as being in the game, while promoting the sales of ship assets which aren’t likely to ever see the light of day. All designed to do one single thing: raise money based on LIES.

The most egregious affront to backers, has to be the promise that 3.0 patch, which included elements shown in all of the above streams, was imminent. Heck, they even went on record, while creating an entire “Road To CitizenCon” video, telling backers that a demo/preview of Squadron 42 was imminent, but that they ran out of time to polish it. Now, with the year ending, not even the much delayed 2.6 patch has been released to backers, let alone anything of Squadron 42. And you know what, I already raised the alarm on ALL of this months ago, and again quite recently (1, 2, 3).

This is what was promised in 2.6, which is already over six months late. They have yet to deliver it, even as they continue to shift the schedule. 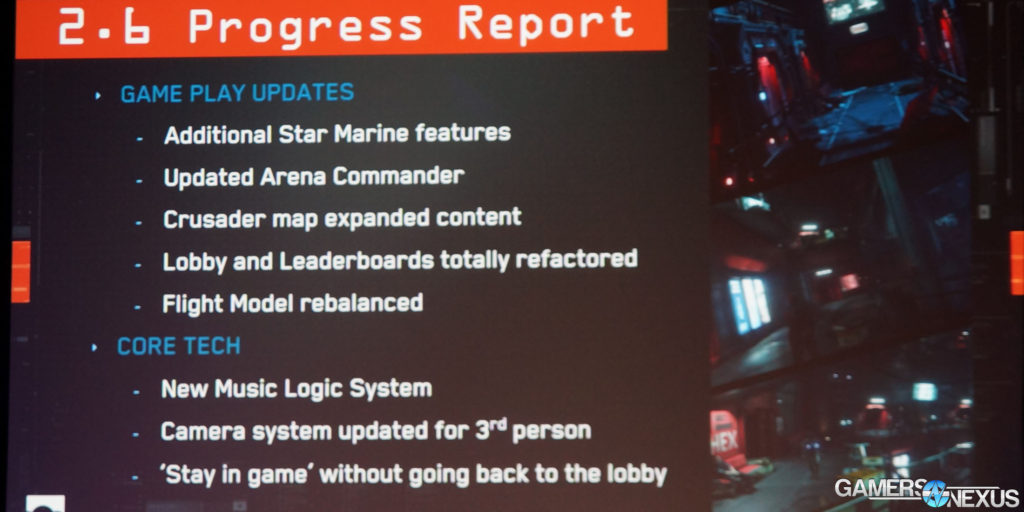 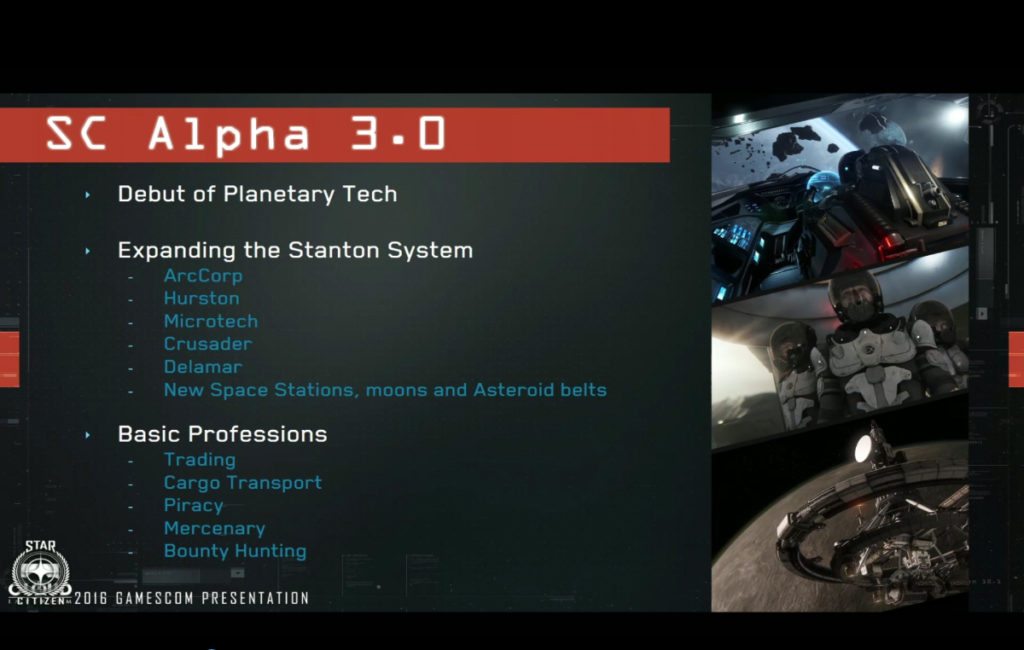 And even as I type this, there are backers who are vehemently denying that Chris Roberts ever promised 3.0 by year end. Despite his own word salad to that effect.

“..so, it’s our big end of the year release. er so er yeah, so we’re gonna get it out the end of the year; hopefully not on December 19th but, er, like last year….but it is a big one, so, not making er, I got shot for making promises, but er, that’s our goal.”

Note that back when I said the schedule was released in order to appease irate backers, and that it was inconsequential, again, I got attacked for it. But here’s the thing: since they first released it, they’ve missed every single milestone contained within. So it’s no different if they didn’t release it, since backers should just as well ignore it. And they keep making suspicious changes (1, 2) to the schedule page itself.

When I wrote the Star Citizen – E.L.E. blog back in April, and pointed out specifically why I believed that the project was inexplicably doomed, that neither of the two games was going to see a 2016 release, some backers waved it out of hand, while others decided to heed the warning and go for refunds (you can read the resulting fiasco in my Star Citizen – Refund Debacle blog from July). Since then, hardly anything has changed that would serve to change that opinion. Heck, this year, all they’ve released have been bug fixes to the 2.0x kernel, an in-game shop for buying pants, some flyable ships, and one new base (GrimHex). That’s it. All year. And, despite the dispute regarding the accuracy of the funding chart, they appear to be on track to raise over $35 million in 2016. In a year where they are on track to raise half of all the money that all of crowd-funding did.

As for Squadron 42, if they ever release any version (demo, prelude, episode 1 or whatever) of it, and it’s not stellar, they’re screwed because seeing as it’s built on the same engine components, it is going to automatically affect the larger Star Citizen game. But that won’t matter, seeing as they have already been paid in advance.

At end of the day, it’s all been a pack of lies, and what I believe to be protracted efforts to mislead backers at every turn. Which, when you think about it, makes sense that they would revise the ToS in order to not only reduce their liability, but also rescind whatever leverage backers have in terms of financial accountability.

At this point in time, what’s going to be interesting is just how those very same toxic backers who are attacking dissenting opinions, will react when they get wind of what is currently playing out behind closed doors. But that’s why we have the legal system, as well as State and Federal agencies who pay attention to things like this.

You all had ample warning. Now you get to bear the consequences.