DOES A BANK NOW OWN STAR CITIZEN?

Over the past weekend, a huge furor erupted after I wrote and article and a blog announcing that CIG/F42 in the UK had taken out a loan with a bank, and that bank now “owned” (this is debatable as per Section 4-5 of the docs) both Squadron 42 and Star Citizen.

As I dug deeper, and heard from various people who had some knowledge and insight to the matter, I decided to write the Final Countdown blog about it. Due to the fluidity of the situation, I have since updated (scroll to the bottom) that blog three times to cover various aspects of this developing story.

Not wanting to increase the length of the blog again, and seeing various nonsensical and false reports and opinions by some gaming “media” and Star Citizen streamers (most of whom have a financial incentive to mislead backers), I decided to write this in-depth article about why I believe that Coutts Bank, not only has secured Squadron 42 as collateral, but in doing so, also holds certain aspects of Star Citizen in collateral as well.

June 13th, Charge by Coutts & Co UK. (NOTE: this is a 29 page JPG album for easier viewing than the original PDF)

Is Star Citizen in it’s entirety really excluded from the “Collateral” (p22) as per the “Excluded Collateral” (starts on p22, continues on p23) definition?

Excluded Collateral means (i) the assets that have been charged pursuant to the Nat West Security Agreement; and (ii) all Intellectual Property Rights and all exploitation and distribution and other rights and all title, interest and materials with respect to the video game provisionally entitled “Star Citizen”;

4.2.2 the Game Assets and the Distribution Rights

4.2.5 all digital material and sound and visual material made or to be made incorporating or reproducing all or any part of the Game

By process of elimination, we know that “Game” refers to Squadron 42. This is because there are only two games (Star Citizen & Squadron 42) in this project. And the former is mentioned in “Excluded Collateral”.

NOTE: These are all FACTS, no hypothesis, conjecture, hyperbole, or opinion.

I have 1st hand knowledge of how that last item works, because I have done it. In 2006, I started working on All Aspect Warfare, a combined-arms game with no space combat. In early 2009, ahead of the game’s release, the community were saying that the aerial flight combat aspects of the game were worth being it’s own game. So I came up with Angle Of Attack which used the same engine and all the same assets. However, it had no FPS aspect, had its own aerial only missions, it’s own multiplayer session (AAW clients cannot connect to AOA and vice versa). I released both games in 2009, and sold them separately, as well as in a bundle. The game’s movies and screen shots show the differences in gameplay, though they share the same basic components. So, without AAW, there can be no AOA.

Item (2) above is the point of contention as it pertains to how some of us believe that the collateral in 4.2.5, came to inadvertently include parts of SC, namely the tech (source code) due to it being used to develop SQ42.

The reason for this position is that there is no feasible way to strip Star Citizen from SQ42, without affecting that game as a whole. ergo, there is no SQ42 without critical components of SC.

Some (like me) argue that “Intellectual Property” defined in “Excluded Collateral”, does not cover everything about Star Citizen, and that as a result, parts of Star Citizen cannot be excluded in this manner, due to the SQ42 dependency.

Others disagree (possibly due to ignorance of how IP law works) with this assessment. Even as they ignore that the same section specifically mentions an aspect, “materials”, which would normally be covered under “Intellectual Property” if it was such an all-encompassing and broad definition – which it isn’t. The other aspects, “exploitation”, “distribution”, “other rights”, “all title”, “interest”, are not generally covered in IP definitions.

The “Intellectual Property” definition which includes Star Citizen, is ambiguous enough to cause a dispute in the event that this loan defaults, and the bank seeks to secure everything related to SQ42 as defined in Section 4. And specific to this, is the carefully worded 4.2.5 which some of us contend, will include the Star Citizen tech, and various assets by the mere fact that they are 100% REQUIRED in order to make SQ42 the “Game” defined, and understood by the bank, to be what they secured as part of this loan. To the extent that they went to great pains to itemized various “Game” components and rights, without ever resorting to using a blanket “Intellectual Property” term to secure them, as they did in “Excluded Collateral”. I wonder why that is.

The argument continues in which, despite the fallacy within, some people have convinced themselves that “Intellectual Property” – as it pertains to SOFTWARE – almost always includes source code, tech etc. That opinion is pure and utter NONSENSE. The reason being, every good software contract that seeks to define IP, will list what that definition entails, in the same way that the bank used an itemized Section 4 to list what the “Charges” under this loan contain.

It boils down to this:

Any good IP lawyer will immediately tell you that in software IP, item #1 above is an immediate legal problem if it were to end up in dispute that a source code for the works (e.g. a video game) was in dispute. One common example – which has in fact resulted in various court cases – is whereby a company, owning an IP, hires a contractor to create some work (art, script, code) for the IP. If the 1099 “work for hire” contract doesn’t clearly stipulate who owns what, and a dispute arises down the road – for whatever reason (e.g. contractor seeks unpaid amounts for their work), that’s a problem. If an employer finds out that an employee is working on a part-time project, while on their clock, they could have a valid claim to his work, regardless of any claims to IP by the employee. See Zenimax v Oculus.

Comparing IP works of art, writings, movies etc to that of software, is the dumbest thing ever. As is the notion that, Intellectual Property automatically encompasses everything associated with the “works” in question.

All the above considered, my opinion remains that if this loan defaults, and the bank seeks to secure it’s collateral assets, and they find out that they really don’t have all the components of the “Game”, they would have a case for either misrepresentation, not negotiating in good faith, or worse, bank fraud (as this security was in exchange for money).

There is also an issue with the fact that the games use Amazon’s Lumberyard. Like all engine licenses, it can neither be re-assigned, nor sold. This means that in the event that the bank succeeds in securing these assets, the buyer would be subject to the licenses of all third-party middleware contained within. In the case of LumberYard, while free to use, the buyer would only “own” those components which are not the “LumberYard engine proper”.

THERE IS NO CIRCUMSTANCE UNDER WHICH THIS LOAN DEFAULTS, THE BANK SUCCEEDS IN TAKING CONTROL OF SQUADRON 42, SEEKS TO SELL IT ETC, WHILE CIG/F42, AFTER GIVING THE BANK WHAT AMOUNTS TO A “DUD” ASSET AS DEFINED IN THE “GAME”, GOES ON THEIR MERRY WAY TO CONTINUE TO DEVELOP, DISTRIBUTE, AND SELL, STAR CITIZEN AS A SEPARATE AND NON-COMPETING ENTITY.

This graphic which someone created, illustrates the issue that is being discussed in very clear detail. 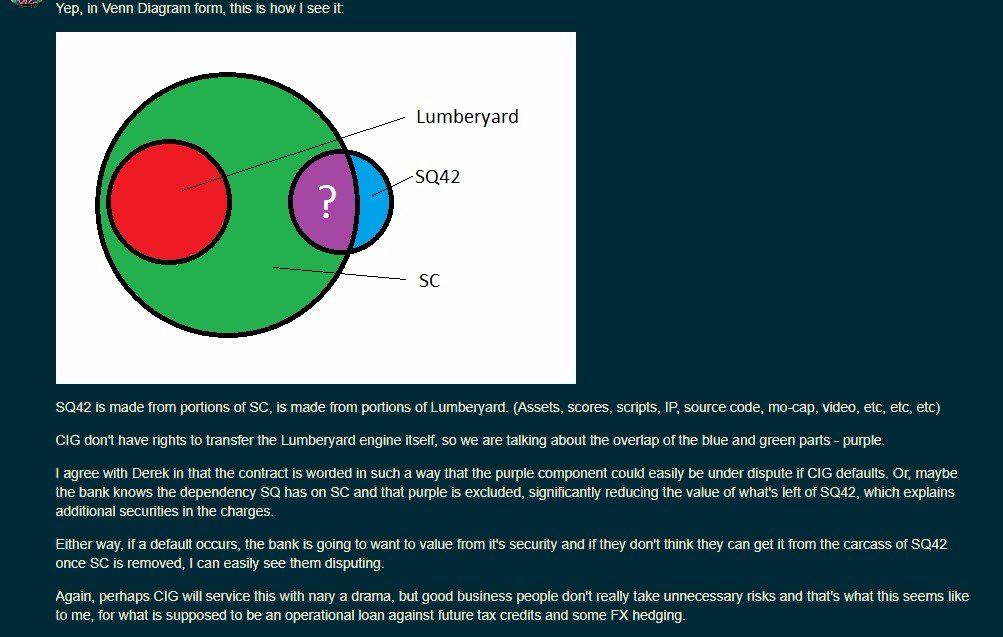